The SonicWall Cyber Threat Mid-Year Report 2022 documents the trends in cybercrime during the first half of 2022. We share the key findings and insights from the report. To download the full report now, click here.

As world events increasingly shape the cybersecurity landscape, our partners at Sonicwall have been tracking the shifting trends, targets and tactics seen during the first half of 2022. We’ve compiled the most critical findings in the mid-year update of the 2022 Sonicwall Cyber Threat Report, which offers organisations of all sizes the actionable threat intelligence needed to safeguard against an increasingly volatile global threat environment. 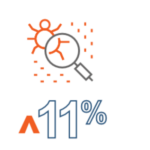 Despite reaching a seven-year low in 2021, malware volume was already beginning to rise in the second half – a trend that has continued into the first half of 2022. Buoyed by increases in both IoT malware and crypto-jacking, malware volume has reached 2.8 billion so far this year, representing an average of 8,240 attempts per customer.

While malware was up overall, in areas that already saw a lot of malware, the opposite held true: The U.S., U.K. and Germany saw malware fall 1%, 9% and 13%, respectively.

While the past two years have seen a meteoric rise in ransomware, the first half of 2022 brought a long-awaited reversal, 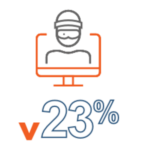 While North America saw a 42% decrease in ransomware volume, this was partially offset by a 63% increase in Europe. This suggests that ransomware isn’t just falling, it may also be starting to shift course due to factors such as government sanctions, supply-chain deficiencies, a limited availability of needed infrastructure and increased attention from law enforcement and governing bodies. 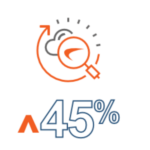 RTDMI leverages machine learning to become increasingly efficient at recognising and mitigating cyberattacks never seen by anyone in the cybersecurity industry. 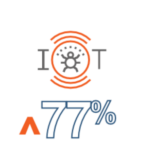 As the number of IoT devices continues to come online, so does the amount of IoT malware. In the first half of 2022, global attack volume rose 77% to 57 million – the highest since SonicWall began tracking these attacks, just short of the 60.1 million hits recorded in all of 2021. While the U.S. already saw more IoT malware than any other country, attacks there rose a staggering 228% through to the end of June. Triple-digit increases were also seen in the U.K., where attacks spiked 134%, as well as across every industry SonicWall examined. 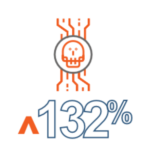 Encrypted threats jumped 132% year-to-date, with Q2 showing particularly strong increases: May 2022 was the second highest month SonicWall has ever recorded for malware over HTTPs. If this trend holds, 2022 could become the third year in a row to see triple-digit increases in encrypted threats. However, there were a few bright spots, such as the retail industry, which saw a 79% drop. 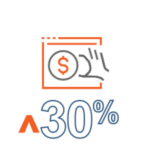 Despite a precipitous drop in the price of cryptocurrency, global cryptojacking volume rose to 66.7 million in the first half of 2022 – up 30% over the first half of 2021. This sustained increase has now reached record proportions: Q1 saw more cryptojacking than any quarter since SonicWall began tracking and January set a new monthly record at 18.4 million. While increases in attack volume were widespread, some were hit harder than others – such as the finance industry, which saw an increase of 269%.

Read All The Facts

For all the information, download the full report here.

If you would like a free 15-minute consultation to discuss how we can help you protect your business with boundless cybersecurity, call us on 0800 032 8274 or book a discovery call here.

We have clients across the south of England and in Europe and our own, on-premises, 1,000 ft² Technology Suite at our Bath office, where we host regular events and showcase technology solutions for our clients. Contact us for your free comms audit or product demo.

Get the latest tech news & reviews – straight to your inbox

What is Zoom One?

How To Support Video Equality In Meeting Rooms